Okay, let’s face it.  Last summer, if you would’ve asked me if BBQ sauce was a simple pleasure, I would’ve snorted and said, no, it’s just something in my pantry.  I might have even thought you were a weirdo.

But deprive yourself long enough of something you are used to eating and, well, it’s probably safe to say you’ll have a craving at some point or another.  What you do with that craving is entirely up to you.

I chose to indulge it.

If you have like an extra 3 1/2 hrs on your hands, google “homemade BBQ sauce recipe.”  You will get recipes, tips, and opinions that will more than fill that extra time you happened to have (you lucky dog, you!).  Unfortunately, most of the recipes called for things I don’t have… molasses, chili powder, Worcestershire sauce, Dr. Pepper, coffee, dry mustard, cider vinegar, liquid smoke, etc.  Ugh. 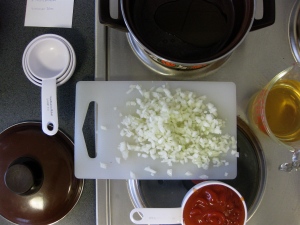 Doc Sci is not an onion-lover; I ended up only using 2/3 of the onion.

However, most websites say to just experiment and come up with your own creation.  Honestly, I was a little scared.  I am decently creative in a general sense, but I have bombed a thing or two while cooking in my day.  Majorly bombed.

I eventually found a recipe that I thought I could sorta kinda make work.  Emphasis on the “sorta kinda.”  Here it is… (with my substitutions)

1 c ketchup  (at least we have good ol’ Heinz here)

Simmer everything for 2o mins.

And now the question arises.. Why make BBQ sauce with ketchup?  Well, apparently, most BBQ sauces are either tomato or vinegar based.  A few are mustard-based, but we don’t have anything resembling American yellow mustard here (German mustard is more bitter and totally un-delicious; no sign of French’s anywhere).   Many, many, MANY recipes use ketchup as a starter.  I won’t do that next time.

Mama, don't forget to write down, you added soy sauce.. and pepper.. and that this stuff does NOT look good while cooking.

I added all ingredients and followed the super intellectual directions.  I simmered.  I stirred.  But I kept tasting ketchup.  Now, I love me some ketchup.  But with fries.  Not with chicken.  Or beans.  Ketchup and beans.  Ewwww.  I ended up adding a little of this, a little of that to get rid of the ketchup flavor.  I tried to keep track of everything I added.  In the end, I just took a picture. 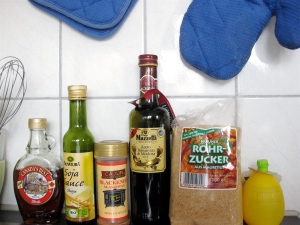 Next time, I will find a recipe that has tomato puree as a base.  Starting with vinegar as a base freaks me out since I’m not entirely sure how that kind of sauce is supposed to taste.

Which brings us to one other, very important question… If you live in the US and can just run down to get your fill of Sweet Baby Ray’s, why in tarnation would you make your own?

First, I learned while couponing that BBQ sauce rarely goes on sale except during grilling season (like Memorial Day to Labor Day).  There are exceptions, but this is generally how it goes.  If you (not me) are craving pulled pork in January, you will have to pay full price.  Gasp. 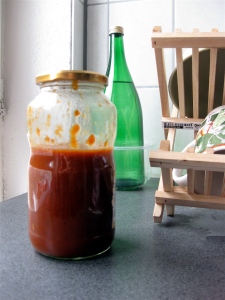 Note to self: jar too big. Small jars are best for small fridges.

Second, as good as most of the BBQ sauces on the market taste, most of them are full of high fructose corn syrup.  Sadly, even Sweet Baby Ray’s.  (In case you are wondering, Heinz ketchup in Germany is made with sugar, as are soft drinks like Coke, Sprite, etc.)  You could find a brand without HFCS in it, but the ones I have tried just don’t have great BBQ taste.

I used my sauce to make a crockpot full of beans & shredded chicken. I put one too many pinches of Cajun seasoning in so our BBQ sauce had a definite kick to it.

Now that you’re craving some beans n’ weenies with sauce, try your hand at making some BBQ sauce.  And then let me know how it goes!

p.s. – I’m not posting my “final” recipe because, well, it was just an experiment.  Just pick one that looks good to you and go for it!i