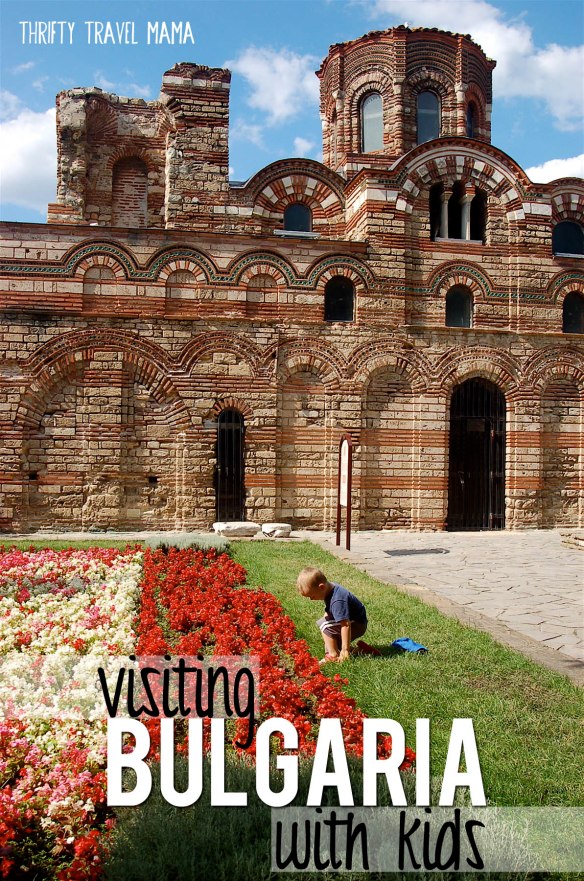 When I told people I was going to Bulgaria, they always looked at me strangely.  “Why?”

I explained I was going for a friend’s wedding.  That seemed okay.  But I think if I would have said, ah, well, ya know, just for the heck of it, I think the look would have gone from strange to startling.  I guess Bulgaria is a pretty random place for Americans to visit.

This was the first trip for as far back as my memory goes (which, after two kids is like, uh, not far at all) where I did not choose the destination, the dates, or the activities.  I did choose my flights, but they had to be in a certain window and to a certain area.  I’ll admit, it was rather refreshing in the sense that I did very little pre-trip research.  But, it was stressful in the sense that the location was fixed as were the dates which made my airline and hotel bargaining power very weak.

Despite that, I had the wonderful experience of attending a Bulgarian wedding and exploring a little bit of a new country from the eyes of the locals.  Here’s a recap of our travels in High Fives and Low Blows.

Culture:  It’s one thing to go to a new place and look around and go home.  It’s quite another thing to participate.  The weddings in the US I have been to are pretty straight-forward: ceremony, pictures, reception.  If it’s an evening wedding, most likely it isn’t going to go past 10pm.  Many weddings are in the afternoon because it’s cheaper.  Well, these Bulgarians really celebrate the marriage and no rinky dink three-hour party is gonna cut it.  The ceremony was held at 5pm, reception at 7pm, followed by tons of traditions and dancing, then cake after midnight, party over no earlier than 3am! 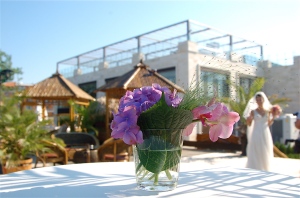 Scenery & Architecture: We visited the cities of Burgas, Sozopol, Pomorie, and Nesebar, all on the Black Sea coast.  Burgas had an amazing sea park, and Sozopol and Nesebar were full of historic churches and buildings.  The views of the sea from some of these places were phenomenal. 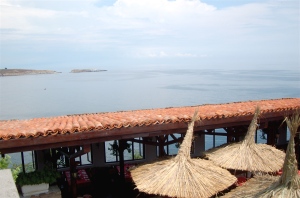 We had a traditional Bulgarian meal at this restaurant in Sozopol. 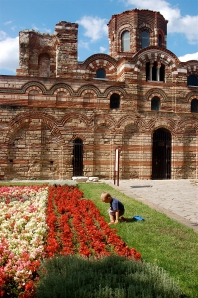 T-Rex playing in front of a church in Nesebar. 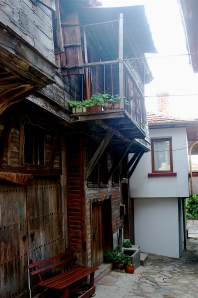 Traditional Bulgarian architecture – the top level is bigger than the bottom level because taxes were levied based on the size of the land used for the ground floor.

Running Along the Black Sea: As I couldn’t afford to totally take a week off marathon training, I did a few runs while in Bulgaria.  I ran in the sea park and had seagulls and children’s laughter for my background music.  Though I only saw one other guy running, it seemed culturally okay for me to run here.  Definitely check with someone in advance who knows the area as some places (like Russia), it’s not really acceptable for women to run on the streets (unless someone is chasing them).

Cheap Food: We had an apartment in Pomorie, but we hardly needed it.  Eating out was surprisingly affordable.  Half of a rotisserie chicken was only about 3 euro.  A bowl of soup was less than 1 euro.  Salads were 3 euro.  Pizza was 1 euro per large slice.  Even Subway (I know, I know) was only 2 euros per 6″ sandwich! 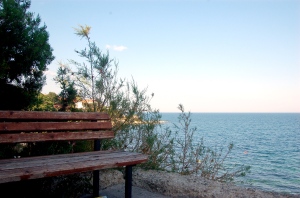 We ate a (cheap!) pizza dinner here in Nesebar. 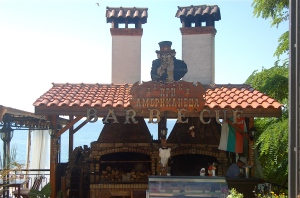 This might SAY American food, but it was all a facade. 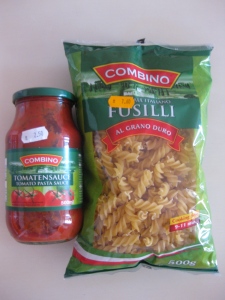 We did cook once – pasta and sauce. Oddly, I bought these items at a little corner store in Pomorie, but they are actually Lidl brand items. Hmmmmmm…

Flights: I’ll go into more detail when I review Bulgaria Air in my next post.  For now, let it suffice to say every flight with this carrier was stressful.  And the flight times were atrocious.  Our flight arrived in Burgas at midnight (not good with little kids), and our flight from Burgas to Sofia left at 5:20am (anyone want to rouse a sleeping T-Rex at 3:3oam?).

Stuff: As I mentioned yesterday, we brought too much.  If we had even left the car seats at home, that would have been much better.  Because the itinerary was set and I had little choice, we stayed in one hotel for two nights, then an apartment for three nights, then back to the first hotel for another night.  That’s a lot of moving when you have too much junk.

Running in Pomorie: While I enjoyed the views and run in Burgas, Pomorie was a whole different story.  I was stared down by every person I passed (which makes me extremely uncomfortable especially when running alone in a new place.. even if it is 8:30am!).  I had to run first thing in the morning because the heat became unbearable at 10:30am.  By 11:00am, you can’t even walk on the beach sand; you will burn your feet.  Pomorie is very small and even trying to get 4.5 miles out of it was a challenge.  Additionally, the “sidewalks” are often only broken uneven concrete, a.k.a. injuries just waiting to happen. 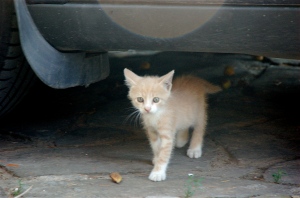 Watch out for stray cats when running; they’re everywhere! 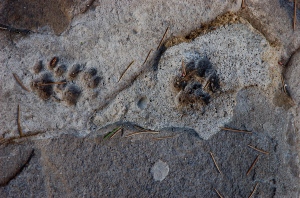 Poverty + Opulence: I did not notice this so much in Burgas, but in Pomorie the contrast was striking.  We had a map with us of Pomorie from only a few years ago, and it seems that a large lake was filled in to accommodate new hotel/condo construction.  As such, we saw mountains of trash and rubble piled near rundown buildings where locals live juxtaposed with multi-million euro properties.  It’s been a long time since I’ve been to Eastern Europe (when it wasn’t covered in snow).  It was difficult to relive what it’s like to be in a place where life is just plain hard.  People often do not care about themselves, their lives, their city because they have little hope of ever achieving more.  Not all of Bulgaria or Bulgarians are like this, but what we witnessed was hard to ignore. 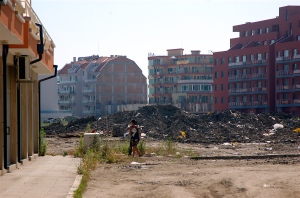 Expensive beach condo buildings and the rubble that remains. 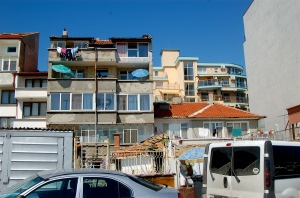 Reminders of Death and Communism: While we read (or chose not to read) obituaries in the newspaper, in Bulgaria they are posted in the streets everywhere.  I’m not sure if this is a positive thing or not, but to constantly see pictures of people who have died has to wear on the psyche.  Many communist statues and architecture remain though the regime is gone.  Perhaps this is just a reminder to be thankful and to fight to remain free. 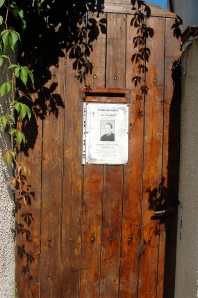 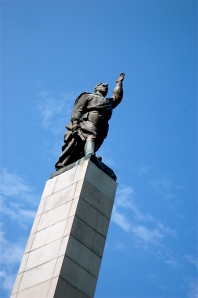 No Manhole Covers: Okay, this isn’t necessarily a low blow, just a disappointment.  Doc Sci and I have been taking pictures of our shoes on manhole covers for years now.  We’ve since added two pairs of shoes to the pictures.  But, we didn’t see a single manhole cover that said Burgas or Bulgaria or anything like that on it.  Boo. 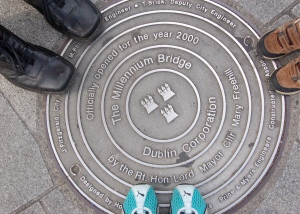