What a week for my beloved macbook to crash and burn, almost literally.  I do not know who (other than me!) is praying for my machine, but it has suddenly resurrected itself.  I’m backing up files and sneaking in a few blog posts before I anticipate the final blue screen of computer death.

Though my computer wiped out, I did not!  I made it!  I finished the marathon last Sunday!  Thank God!

And, how did it go?  Well, it just wouldn’t be like me to not have a story to tell.

After my 19 mile run weeks ago, my iliotibilial band (say that fifty times fast) started hurting.  It got a bit worse, but I ran my 22 mile run anyway because my travel schedule afforded no alternative date for such a feat.  I iced, I stretched, I prayed.  The pain eventually stabilized, neither increasing nor decreasing.

When my injury first manifested, I wanted to visit a chiropractor because apparently iliotibilial band issues can be traced to faulty pelvic mechanics (nothing to do with wrenches, mind you).  My insurance didn’t cover chiropractic care; self-pay would cost me 120 euros PER VISIT.  I have a history with chiros and know they want you to come 3x/week for the rest of your life.  This is Thrifty Travel Mama, not Rollin’ In It Travel Mama.

During a conversation with a German friend the weekend before the marathon, I found out about such thing as an orthopedic doctor.  This doctor seems to be some kind of sports medicine / osteopath type person, but it is a regular kind of dude that does not cost more than a month’s worth of kindergarten tuition for one visit.  I prayed for an appointment.. and got one.

(Are you getting the prayer theme yet?  Do not attempt such a ridiculous stunt without it.  Or, life in general for that matter.)

This particular doctor was very nice, and seemed to be a runner himself.  I got an ultrasound on my leg, two shots of cortisone, and the advice to slow my finish goal to 4 hours, 30 mins.  Screech got a free truck.  I walked away with less pain and the hope that I would be able to make it through the entire race.

We left on Saturday since it is impossible to get from my city by train in time to make the 11:11am start.  During the first train ride, T-Rex complained of stomach pain.  On the second of the three trains we took, he barfed a bit on Doc Sci’s jeans, just enough to be annoying.  We cleaned it up and moved to the end of the train car since we were going to get off in about 10 minutes.

Again, T-Rex said his stomach hurt.  I didn’t think much of it until he started to moan and then BLECK, wretched all over the train car floor.  I just looked at it, dumbfounded, trying to figure out what to do when BLECK, up came the next round.  And the next.  And the next.  No one moved.  No one helped.  Just a lone, “oh great,” was heard from somewhere in the car.

We quickly grabbed some paper towels to clean ourselves up (I was the lucky recipient this time), and then haphazardly scattered the rest of the paper towels on the sea of vomit.  Boy, was I glad to get off that train.  But then the real freaking out began.

For those who don’t have kids… Stomach viruses are very common in kindergartens.  Unfortunately, they move fast and can lay an entire family low for a week (case in point).  To kill it, you have to clean with bleach.  Nothing else will do.  Not only did I not have bleach but considering the circumstances, I couldn’t even quarantine myself off from the potential bug.

So we prayed.  A lot.  And God answered.  T-Rex didn’t hurl again, and neither did anyone else in our family.

We arrived on the island of Lindau (still in Germany) in the afternoon and followed the well-posted signs to the Sparkasse DreiLänder Marathon convention where I picked up my participant packet and dropped off my homemade gatorade.

For sale at the convention.. this awesome lederhosen compression running suit. Gotta get me one a these! 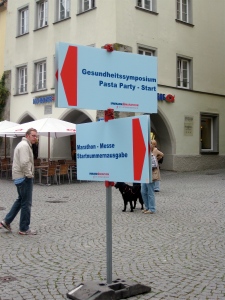 I was impressed with how well signed everything was. We easily found our way around without a map. 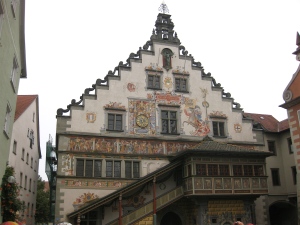 Lindau was a cool little island. This building housed the health symposium. Sweet.

I have no idea if US marathons do this, but in European marathons, you can have your own nutrition (food and/or drink) dropped off at a designated point along the race route.  Nice to not have to carry your own all the way or just rely on the sustenance provided.

Think spaghetti and tomato sauce can't be screwed up? Try it in Germany. Even the pile of Parmesan couldn't help.

We then stuffed our faces with some seriously awful pasta and took a ferry to Bregenz (Austria) where we had reservations at the Pension Sonne for the night. 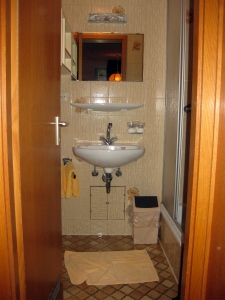 Pension Sonne - en suite bathroom. The floor below us had shared bathrooms. 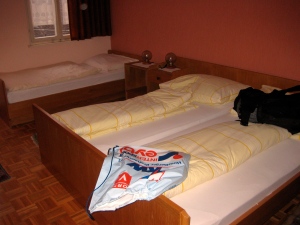 Pension Sonne was totally overpriced (126 euros per night) because of the marathon, but it was the best I could do for a triple room.  It was old and basic for sure.  However, I was surprised to find out that our room included breakfast (which for Doc Sci also means lunch because German breakfast is basically sandwich fixin’s).

This helicopter was at the start and followed the winner to the finish.

After breakfast, we headed for the port where I would take the third of four ferries back to Lindau (the start location).  Thirty minutes before, the place was packed with runners.  Luckily, I got on the ship.  I stretched and then stood in line for the bathroom.  Total mistake – I should have stretched in line since I had to wait at least 30 minutes for the port-a-potty and barely made it to the start in time. 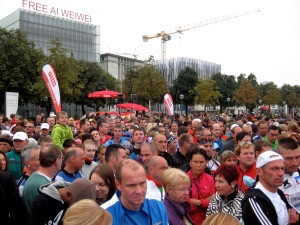 All these people are waiting to get on the ferry! 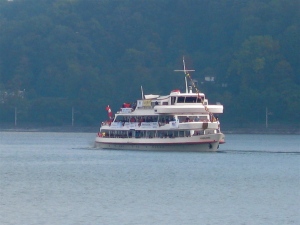 The ferry between Lindau and Bregenz.

While in the loo line, the girl in front of me turned around and asked if I spoke English.  Why yes, yes, I do.  Turns out Jenny (hi, Jenny!) was from New York but is living in Germany with her husband and two boys who would wait for her at the finish line.  It was nice to have a conversation and start the race with someone, though we only ran together for about 5 minutes.

My start block was right next to this funky tower with Rapunzel accessory.

A note about the Sparkasse DreiLänder Marathon… It’s billed as a “marathon for the eyes” and supposed to be a great scenic course that starts in Germany and runs through Austria and Switzerland.  While it is true that it does go through three countries, only the beginning sports super amazing scenery.  Some parts are ridiculously boring (industrial plants and typical residential streets), and some are seriously smelly (cow pastures, mmmmm).

Crazy, weird, ginormous statue we ran past in Bregenz.

Pretty part of the route by the Bodensee (big lake).

This crazy fog came in Saturday evening, stayed through the morning, and lifted for 3 of the 4 hours I ran.

Anyway, I made it easily to Doc Sci  and the boys standing at the 10k mark.  What a boost to see three handsome men cheering me on!  My iliotibilial band felt fine – I couldn’t believe it.  From 11k to 21k, I could tell I was tired.  I didn’t run as much in the last four weeks as I should have due to the injury.  I felt myself dragging but pushed to remain running continuously for at least the first half.

For running nerds (and electrical engineering nerds), this sticker on the back of my race number kept track of my time! No more champion chip on the shoe.. this sticker is all I needed. Doc Sci thought it was totally cool I would be wearing an antenna and RFID device.

Almost to 21k, I saw a girl holding a sign that said, “Yes You Can” (in English).  She smiled directly at me, and call me silly but somehow I felt that message was for me.  It was a boost I needed and a moment I remembered through the rest of the race.

Somewhere in the third quarter of the race, I started walking through most of the water stops.  I would have liked to run the entire race, but my injury pretty much dictated that would be unrealistic.  Plus, I would have to go to the bathroom at least once and there’s no way I’m going to run while doing that! 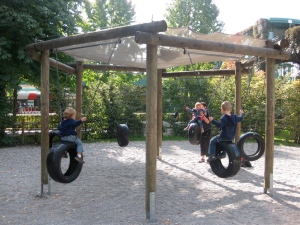 This is what my kids did while I ran.

So many times, I wanted to just quit.  Sometimes I’d walk a few paces and then remember inspiring quotes I’d seen, like “I don’t stop when I’m tired.  I stop when I’m finished.”  I thought about how nice a shower would be and how I wanted to see my boys again.  I would see people limping and unable to finish.  I’d pray for them and then pray that didn’t happen to me.  I only plan to do one marathon, and this is it.  Finish well, finish strong.

At kilometer 40 (of 42), someone passed out and an ambulance came.  I had to run around the vehicle as it took up the entire path.  I just kept praying and running past all the walkers (so many stopped running!).

I reached the finish stadium which was a tease because the route actually goes around the outside, then inside, then halfway around the track.  Sheesh!

Before going in to the stadium, I saw my boys!  Yay!  T-Rex came out and ran the last bit with me.  I could have had a little bit faster time, but I was glad to have my son cross the finish line with me.

About to enter the stadium with T-Rex.

Running to the finish with T-Rex!

All of my men have been so supportive in this adventure.  For five months, Doc Sci rode his bike next to me on my weekend long runs and the boys put up with long rides in the bike trailer.  I had no one to actually run training routes with me (except 12 miles with Sarah – hi Sarah!), but these boys were with me the whole way.  I know I could not have completed training or the marathon without their support nor without God’s strength and goodness.