If you were flying ten hours with two little ones in tow, what would you wish for in an airline? 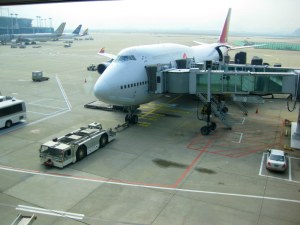 Most of the above amenities are part of Asiana’s Happy Mom Service.  The Happy Mom Service actually has even more perks if you have a younger child (guaranteed bassinets, complimentary nursing covers and slings, etc).  Asiana has rolled out a Happy Pre-Mom Service for pregnant women as well.

My great experience started at booking with Asiana.  I had to go through a travel agent for my tickets (Doc Sci’s ticket had to be booked this way since it was covered by the university because he was attending a conference in Korea).  I had a miscommunication with the agent regarding one of our flights resulting in an incorrect booking.  When she called Asiana to ask what my change fee would be to correct the flights, I was able to change the flights for only 20 euros, instead of the usual 200 euros (which would have cost more than the fare itself).  Wow.

A week before the flight, I contact Asiana’s US customer service phone number.  The center, located in LA, was closed, but I was routed on to customer service in Seoul.  I was able to reserve a car set for Screech (note that this car seat service is only available on international flights for children 24 months and younger who have purchased a seat) as well as children’s meals for both international flights.  The car seat was installed just as requested both times.  Impressive.

Screech chillin’ in his special seat. A bit girly, but clean and convenient.

The Happy Mom Service check-in lane at Frankfurt Airport is shared with Asiana Diamond Club check-in.  In reality, you probably can go in any check-in lane.  What I learned, however, is to make sure to ask for the priority luggage tags.  I asked too late when checking in at Frankfurt and only one of our three bags received the tag.  The same thing happened to me when checking in for our domestic flight from Seoul Gimpo to Jeju.  Don’t forget to ask!

We brought a stroller to gate-check which was not a problem.  However, if you do not want to gate check your stroller (and do not have a fancy shmancy stroller cover already), Asiana has large canvas bags to put strollers/car seats/etc in so that these items are not damaged or dirtied during handling.  What a contrast this is to American carriers.  I am usually begging the check-in agent for a plastic bag (that usually costs money!) to put over a car seat or stroller.

On all flights, the passengers started lining up before boarding at some secret time known only to them.  I obviously didn’t get the memo and before I knew it, we were stuck at the end of the queue.  Luckily, I remembered the pre-boarding perk and only had to ask before being whisked to the front of the line, boarding even before Diamond Club members!

While waiting for the plane to load on the two international flights, the attendants brought my boys 3D puzzles.  While a bit advanced for them to figure out themselves, the paper cars and animals were a welcome distraction to pass the time.

And, just a note on boarding with Asiana..  The airline allowed only 15 minutes to completely load a plane of over 30 rows of 6 seats each.  And it worked.  Passengers filed in, sat down, and were ready to go.  On time.  So much for German efficiency – bring on Korean efficiency!

On the international flights, each seat had an AVOD device.  We were supposed to fly Boeing 747’s both ways, but an equipment change in Frankfurt left us with a 777 to go to Seoul.  This was probably due to an extremely small load that day.  Almost every passenger had 3 seats to himself!

Unfortunately, on the way to Seoul, the AVOD devices in our row did not work.  The attendant graciously reset them several times, but still they only worked intermittently.  This was majorly annoying, but what could be done?  T-Rex moved to a different seat, but Screech was in a car seat and couldn’t move.

On the flight back to Frankfurt, the 747 had MUCH bigger screens (at least the size of my iPad2) which worked a whole lot better.  Kids programs included Thomas the Train, Bob the Builder, and Pororo, a Korean cartoon my boys really grew to enjoy during our time there.

Each flight offered a Korean and Western meal option.  I chose the Korean option both times and was pleasantly surprised.  I’m not a kimchi fan, but the bibimbap and ssambap were both delicious and better than the Western option which Doc Sci had (of course, he thought the Western meal was better!).  The boys weren’t crazy about their kids meals, but they never are.

In the lavatories, passengers could help themselves to complimentary toothbrushes, toothpaste, mouth wash, and hand lotion.  Flight attendants also handed out complimentary slippers to economy passengers.  I believe you can also request an eye mask from flight attendants.  All of these are business class perks on American carriers. 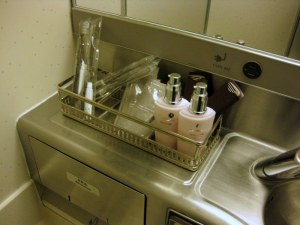 Complimentary amenities in the lavs.

Throughout the flight, attendants constantly handed out glasses of water and juice.  On the flight back to Frankfurt (not a night flight), passengers were even given a sandwich and a bag of snack mix in addition to the two hot meals.

I’m sure I don’t have to say that I’d definitely choose Asiana Airlines again.  There’s no doubt that Asiana is a five-star airline.  Combine excellent service with excellent fares, and I’m sold.  Thanks for a great trip, Asiana!