Last year, I told you all about St. Nikolaus coming to visit, scheduled and on time.  But, I thought you might be interested to see what St. Nikolaus brings to children, and a little bit more about the bearded man in red.

I’m not sure if this is what all parents/kindergartens do, but I’d suspect it’s pretty close.  Our kindergarten does not do a boot/stocking/sock.  Rather, they just have reusable red sacks that must be returned by the end of the week.  Don’t ever let anyone tell you that Santa doesn’t recycle.

What’s in the bag?  A big chocolate St. Nikolaus, of course.

But then there is always fruit (an apple and an orange), nuts (I guess they expect everyone to have a nutcracker at home?!), a bit more chocolate, and a bread man.  You read that right: a bread man, not a gingerbread man.  This is what’s left after a T-Rex hunger attack.

P.s. – I’m sure the sack had more chocolate in it before making its way home. 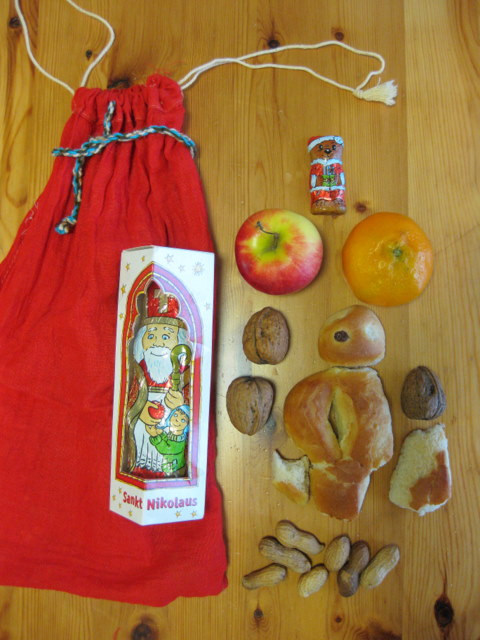 And while I could do a standout job summarizing the difference between St. Nikolaus and Santa Claus, I came across a Q&A from The Local that just can’t be beat.

Is Nikolaus the same as Santa Claus?

Though they have similar outfits, Nikolaus is not to be confused with Santa Claus, who Germans call the Weihnachtsmann, or Father Christmas. They are two different people. In fact, many religious families try to focus more on Nikolaus earlier in December to ensure that Christmas is actually about Jesus’ birth, and not presents from an Americanised and commercialised Santa.

Who is Nikolaus, then?

Each year on December 6, Germans remember the death of Nicholas of Myra (now the Anatolia region of modern Turkey), who died on that day in 346. He was a Greek Christian bishop known for miracles and giving gifts secretly, and is now the patron saint of little children, sailors, merchants and students. Known as Nicholas the Wonderworker for his miracles, he is also identified with Santa Claus. Beliefs and traditions about Nikolaus were probably combined with German mythology, particularly regarding stories about the bearded pagan god Odin, who also had a beard and a bag to capture naughty children.

Why do children set their shoes out on the night of December 5th? Doesn’t he have any?

Of course Nikolaus has shoes. The custom began because the historical St. Nicholas had a reputation for leaving secret gifts, such as coins, in people’s shoes overnight. Kids traditionally put out their boots, though shoes or stockings will suffice for those without boots.

And the boots have to be polished first?

Definitely. Dirty boots are unacceptable. Children polish their boots to show they’ve been good. They usually place just one boot outside their door so they don’t appear too greedy, though.

One polished boot: Check! What happens next?

According to the legend, Nikolaus comes in the middle of the night on a donkey or a horse and leaves little treats – like coins, chocolate, oranges and toys – for good children.

What do naughty children get?

This depends on different family traditions. Sometimes Nikolaus only leaves a switch in the boot, ostensibly for spankings, to show that the child doesn’t deserve a treat. In other families, a man disguised as St. Nicholas will visit the family or the child’s school alone or with his with his sinister-looking alter ego Knecht Ruprecht to question the children about their behaviour.

He is usually pictured with a long white beard, a bishop’s mitre and a red cloak, sometimes with a sack over his shoulder and a rod in his hand.

Does Nikolaus come again on Christmas Eve then?

No. Santa Claus, or the Weihnachtsmann, usually comes to German homes – often in person – on the afternoon of Christmas Eve.

For the full article and a great group picture of Nikolaus dresser-uppers, click here.

3 thoughts on “St. Nikolaus – Not Your Average Santa”