Last summer, I posted about T-Rex learning to ride a pedal bike at the ripe old age of 3 1/2.  After a lot of practicing in the park, Doc Sci and I thought he was ready to ride to school.  We were right.  And wrong.

As I mentioned in the last post, ability doesn’t necessarily equal responsibility.  While he’s nowhere near as observant as an adult would be, six months has given him a lot of time to learn (and actually do) things like don’t ride too far ahead, stay to the right, stop at red lights, etc.  He’s doing exceptionally well in this area, and I rarely have to go over the rules anymore before setting out.

However, we realized last fall that the bike he was riding was actually too small.  It was almost impossible for him to keep up with Doc Sci or I when riding on the street.  He would pedal furiously, we would pedal lazily, but still a large gap remained.

Since it’s not really safe (or comfortable) for T-Rex to ride his bike in winter, we waited until the weather warmed up to make any changes.

Several weeks ago, I bought T-Rex another bike (again at a flohmarkt), one size bigger than the bike he already owned.  It took him a few days of practice in the park, but then he was good to go.

Wow, what a difference a few inches in wheel size can make!  We now almost always ride side by side, and sometimes he is even faster than me.

As I cycled home with him from school with him the other day, I thought to myself how strange it must be that my four year-old rides 1.5 miles to and from school every day.  Instead of trying to describe the experience to you, I’ve decided to show you in pictures.

So, without further ado, please enjoy a photo story of T-Rex’s ride to school.

T-Rex on his new bike, ready to go.

We start out slow and steady. Our street has relatively little traffic, and we have a dedicated bike lane on the sidewalk. 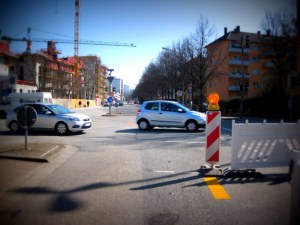 First intersection. Today, there's road work on the sidewalk, so all bikes have to ride in the street with the cars.

In general, children under the age of 10 must ride on the sidewalk. Since there's no dedicated bike lane on the next stretch of pavement, I ride with the cars, and T-Rex goes on the sidewalk. We both pass over the freight rail road tracks.

After the tracks, the bike lane reappears, and it's back on the sidewalk. This is by far the easiest part of the route.

Easy doesn't last long. The next intersection is wide and confusing. T-Rex must go straight through to the sidewalk and then go left, and I must turn left across traffic to access the bike lane which is now on the street.

The sidewalk and bike lane are separated. We are fast approaching another intersection. 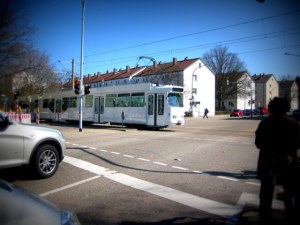 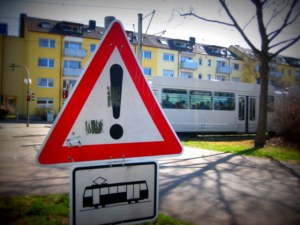 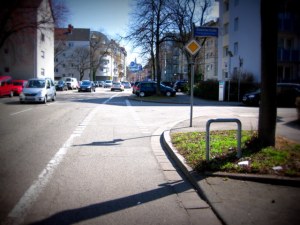 Here begins one of the most stressful segments, again with me in the bike lane and T-Rex on the sidewalk. If it weren't for the flag on the back of T-Rex's bike, I would not be able to see him riding due to the line of parked cars that lies between us.

This light is always red for us. I don't mind; I need a breather because the next stretch of road is even worse.

Not only are we separated by parked cars, but this street is always busy with pedestrians which slows down T-Rex's sidewalk cycling. Plus, it is the only segment of the route that I must be extra careful to watch for cars on the side streets, because they don't stop for little boys or their mamas.

This is T-Rex's favorite part, riding under the city's main railroad tracks. 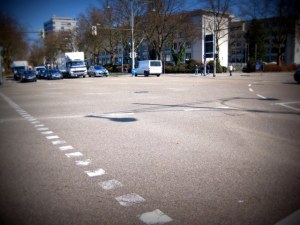 Just after the railroad underpass, we come to one of the busiest intersections in the whole city.

When the bike signal turns green, we hurry across, all the while being mindful of red light runners.

Thankfully, the bike lane goes back on the sidewalk, and T-Rex can ride next to me.

But not for long! I'm about to end up in the street again, this time keeping my eyes open for buses pulling over at the upcoming stop.

After crossing one more intersection, we turn off the main road, and I breathe a little easier. I much prefer riding in alleyways than on the street. 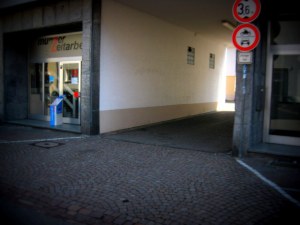 We cross one last road, and enter the final alley.

We've arrived, sweaty (and stressed). Time to take a break and get some work done, because in about four hours, we'll have to do it all over again!

3 thoughts on “T-Rex Cycles to School”