As I mentioned in my last post, we’ve just returned from an insanely long, three-week vacation in the good ol’ US of A.  I’m learning that Germans are all about REALLY taking a break.  One week is peanuts, two weeks is getting closer, but three weeks is ideal.

Some days, I really do love the German way.

So, how did we spend that three weeks?  Here’s a recap of our time, in pictures.

We ate. A LOT. This waffle the size of T-Rex's head was no match for him. He devoured the entire thing, and still found more to enjoy at the buffet. And now you know I'm not just thrifty to be cool but because I'm going to be flat broke when I have three teenage boys if I don't watch my pennies now.

We introduced the boys to some of our favorite eats (tart soft-serve yogurt, mmmm), and frequented old favorites. Though we gave our money to Chipotle at least four times, I somehow never got a picture there. More than likely I was too busy stuffing my face.

We indulged.. a little. Before I left, my ob/gyn warned me to be careful of "all the donuts" in America. She was dead serious. Good thing she didn't say anything about cupcakes! 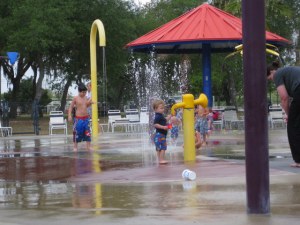 We went to the splash pad more than once, because those thrills don't exist in our little German city.

We found some stellar playgrounds, like this one that had a sand pit with at least a dozen diggers and big trucks.

We visited the Adventure Science Center with Grandpa and Grandma in Nashville, TN (in case you go - I thought it was rather overpriced for my thrifty ways since kids 2 and up were $12 each and adults were $14!).

We hung out with old friends, and the boys even made a few new ones. We made visits to two great-grandmas and met second cousins.

Screech set the record for the most bumps, bruises, and scrapes of any trip to date. He also got used to wearing a band-aid for the first time. 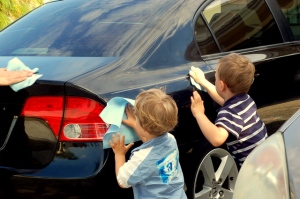 We caught up on oh-so-exciting grownup responsibilities like car maintenance. 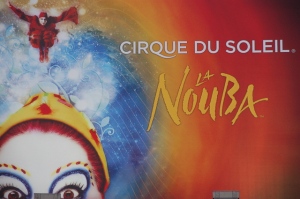 Doc Sci and I went on TWO dates, one of which was to Cirque du Soleil's La Nouba (fantastic). 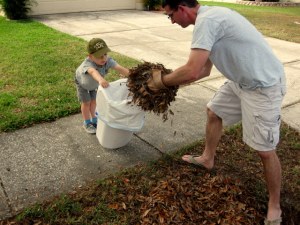 We did some chores.. emphasis on some... but only because we stayed with friends and we wanted to help out.

Thanks, America for a great vacation this year!

6 thoughts on “Three Weeks in the US”