On our first trip to Berlin, we stayed in Mitte in an old DDR flat.  This time, we stayed in a much nicer flat operated by Stadtraum Berlin Apartments in the Prenzlauer Berg neighborhood.

Prenzlauer Berg is a fantastic area for visiting families.  It has the highest birth rate in Germany, and perhaps even in Europe.  As such, there are numerous children’s shops and playgrounds in the vicinity, and restaurants expect noisy kids at their tables. 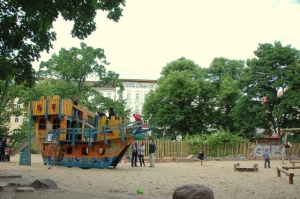 The playground at Helmholtzplatz, one of many in Prenzlauer Berg.

Since Berlin does not really have a main city center, it’s best to choose a neighborhood based on your itinerary.  Doc Sci had to attend a workshop way up north, and the Schönhauser Allee S-Bahn/U-Bahn station was convenient for him as well as for us to head into the city center every day.  I centered my accommodation search around this station, and finally booked Apartment Audrey.

The price was reasonable at 79 euros per night plus a 20 euro cleaning fee upon check-out.  We were not charged for the boys.  A 100 euro deposit was required upon booking (paid as requested via bank transfer which is the norm in Germany), and the balance was to be paid in cash upon arrival.

My experience with Stadtraum, both before and after checking in, was very good.  Emails were answered promptly, and it was no problem to correspond in English.  We found the flat easily; and we were met at the agreed upon time and shown around the flat.

From prior experience, we know it’s best to set up the internet ASAP in case there are problems connecting.  We did have difficulty, but it was resolved right away.  The complication revolved around the site of the wireless router.  It’s located across the courtyard, so our iPad only received a signal in the kitchen.  Not great if you’re bringing a laptop and planning on streaming a movie from the living room, but fine for my purposes.

The only place I could get internet access was here in the kitchen, facing the window.

I requested a baby cot (Screech doesn’t need it anymore, but he sleeps better if he has a separate bed).  It was free of charge and all set up upon arrival.  Unfortunately, no sheets were provided for the cot.  We just used some of the existing bedding, but that would not have worked if we had an actual baby sleeping in the cot. 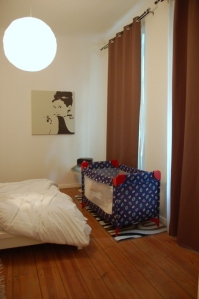 Apartment Audrey has something called a pantry kitchen.  I’d never seen one, but it looks like a kitchen contained in a pantry (really, more like a European wardrobe).  There’s no oven and the refrigerator is quite small, but it was sufficient for us for a few days. 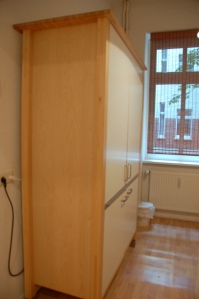 The pantry kitchen – the sink, fridge, two burners, microwave, dishes, etc. are all contained in here.

The bathroom (stated on the website as “kleines aber feines,” or small but nice) is the smallest I have ever seen.  The toilet cannot be perpendicular to the wall or else it would be impossible to sit down.  And don’t even ask me how I managed to fit in the shower at 8 months pregnant! 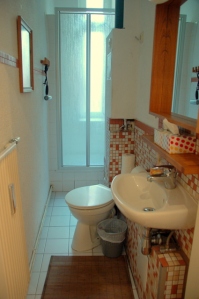 The futon in the living room where we slept.

Apartment Audrey’s website states that it comes with a TV.  And, it does.  But, it’s not much bigger than my iPad.  Adjust expectations for watching movies after kids are in bed accordingly!

Teeny TV, but it does come with a DVD player and a guest copy of Breakfast at Tiffany’s.

One thing I noticed was the effort that Stadtraum Apartments took to provide amenities that most holiday flats do not.  For instance, the bathroom has a hairdryer.  Umbrellas are hanging by the front door.  And in comparison to the other holiday flats we have stayed in, this kitchen was very well equipped.  It had paper towels, a toaster, a corkscrew, and a microwave among other things.

Should we find ourselves in Berlin again, I’d definitely consider staying in Apartment Audrey or another Stadtraum Berlin Apartments property.