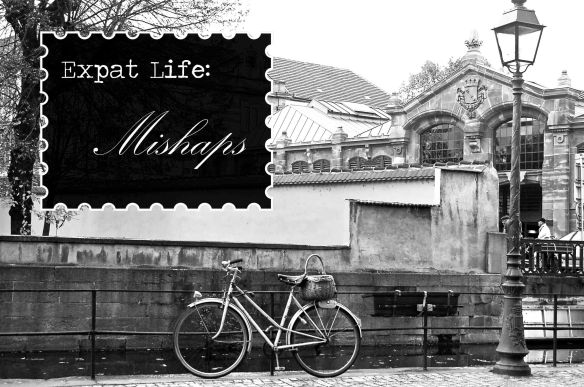 Have you forgotten how it feels to have a baby in your arms, in your care?  I suppose if you’ve never had one, I’ll grant you that excuse.  But your face betrays the fact that you know.  May I presume then, that you’re drawing a blank as to what it’s like to run errands toting a baby who protests his presence in your plans with all the force his twenty two pounds can muster?

Yep, I’m that parent, the one who parks her bike + trailer as close to the bank door as possible without actually blocking the exit or getting anyone else’s way but still manages to absorb the sneer of the suited man on his way out to grab coffee.

Yep, I’m that parent, the one who precariously positioned her baby on the ledge jutting out in front of the ATM, while flailing arms punched numbers, grabbed cash.  Yes, I know I could’ve put the baby on the floor, but wouldn’t you have glared harder had he howled in protest at being only an arms length away from his beloved?

Yep, I’m that parent who weaved through the pedestrian crowds with said bike + trailer the length of a minivan, accidentally bumping old ladies and chanting “excuse me” right and left as if tossing flowers for a bride behind.

Yep, I’m that parent, the one that found a marginally acceptable place to park the self-propelled minivan in front of the home goods store only to have the entire bike and occupied baby seat tumble over while reaching for the steel U-lock nestled on the floor of the trailer.

But you, you were the one who wagged your head at me in judgement as my baby wailed more from shock than pain.  You offered me no help.  You craned your neck to peer at the poor woman who surely must be idiotic or inconsiderate to allow her child to topple toward the cobblestones.  You wondered, was I that kind of parent?

Yep, I’m that parent, the one whose left arm cradled a concrete ten month-old and with the right clutched a bag containing a rather fragile plate bearing a chip not noticed until purchased with precious little pocket money, all the while praying that neither arm would give out.

Yep, I’m that parent, the one who rehearsed the phrases in another language, debating word choice, verb order, correct question grammar, formality all in a whisper while shushing her still-whimpering baby.

Yep, I’m that parent, the one who fumbled over her lines, voice trailing, humiliation apparent, yet surprisingly emerged victorious with a darling new, chip-free plate destined to be the centerpiece of friendship and fellowship for as long as it shall live.

Yep, I’m that parent, the one who held her head high as she walked past you, the onlooker sipping her coffee in the shade of the cafe and squinting at me in disapproval, only to realize that the awful crunch and creak coming from below belonged to a hopelessly flat tire sentencing me to an even further frustrating walk home.

Yep, I’m that parent, the one who has these kind of adventures almost daily, the one who sometimes finds kindred spirits and kind faces, that blessed stranger that gives empathy so warm you care not if summer ever arrives or if it should leave without notice.  But, alas, not today.