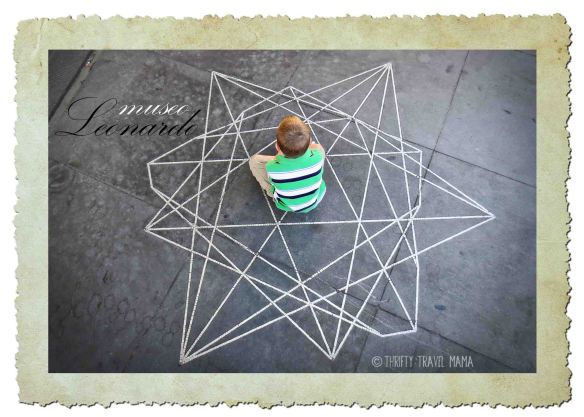 The little town of Vinci would probably never have made an appearance on anyone’s travel bucket list if it weren’t for two guys – one named Leonardo and the other Dan Brown.  Now that the Da Vinci Code craze has died down, nerdy travel can resume.  This blip on the map offers a must-see museum for visiting geeks and their families.  But don’t just take my word for it… Consider the following testimonials:

“The museum was so cool!  There were guns and machines and lots of buttons to press.”  T-Rex, age 5

Okay, that was only one, and it came from my own kid, but whatever.  This place rocks. 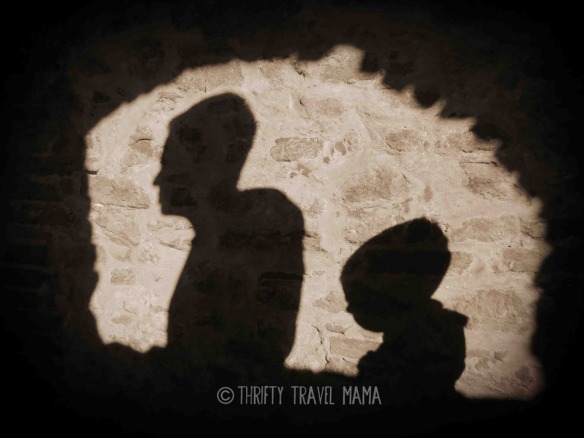 The Museo Leonardo is split into two different sections, the new one (2004) and the old one.  Both sections are full of models based on Leonardo da Vinci’s drawings.  Many of these works are merely sketches of concepts, so the majority of exhibits in the museum are other people’s interpretations and renderings of his ideas in 3D.

Visitors begin their time at the Museo Leonardo in the new building.  Tickets are purchased here, and pit stops can be made downstairs.  This section has lots of cranes and looming machines.  Most of the models are miniaturized versions, but a few were full size. The cranes certainly held the most appeal for the under-10 crowd.

By the way, photography is not allowed inside of the museum, but I took a few photos before realizing this fact.  Doh!

One full-size machine for flattening gold (basically a big hammer) was a physics lesson waiting to happen.  T-Rex was able to figure out how it worked and what its purpose was based on my descriptions of other machines.

Yes, a proud moment indeed for this nerdy dad…

The area between buildings is decked out with Leo-inspired art.  This would be a good place to stop for a snack in hopes of bribing uninterested children and bored-to-tears spouses to continue on to the next building.  More great geeky stuff awaits…

The old building features all of the da Vinci-designed guns and cannons.  T-Rex loved this section, as you probably could tell from his quote above.  Following the ka-boom exhibit, we explored my favorite area which displayed his flying machines and his engineering sketches (wheels, gears, etc).  Full disclosure: T-Rex could have cared less about the intensely nerdy stuff.

Stay with me, because you’ll want to see the far-out features on the upper level of the old building.  Don’t miss the bike, boat, and underwater breathing apparatus. 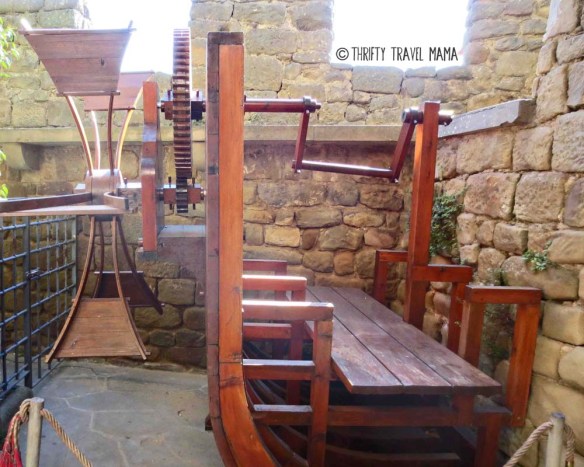 The crown jewel of the old building is the optics section.  This area was an instant hit with my son since it was interactive (much of the museum is no-touch).  I won’t go in to a lot of detail because I should leave something for you to discover when you visit yourself.

But, I will mention that the two main concepts the exhibit tried to teach were reflection/refraction and perspective.  Honestly, this was a little over my five year-old’s head, but he still had a blast just playing and pushing buttons while I pored over every detail.

At the end of the visit, you can climb the tower for a panoramic view (120 steps – no prams or claustrophobics). 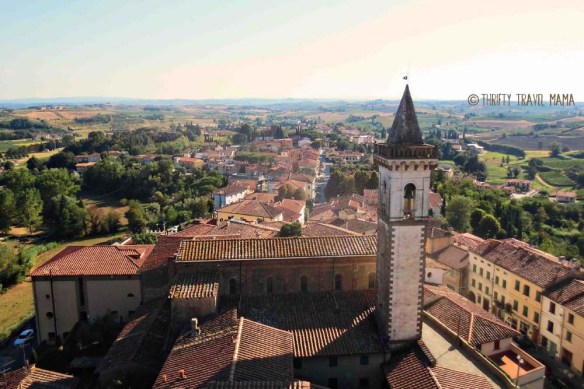 So, I know you want to ask… would non-nerds like it?  I would say yes, and here’s why.  Beyond the science and math, the exhibits describe a lot of history with a touch of art thrown in here and there.  Humanities-minded visitors will appreciate just how ingenious Leonardo’s work was for his time.

And even if you don’t understand the machines, inventions, ideas and how they work, they’re still just downright cool.  The real takeaway from this museum to discuss with your kids is the value and power of innovative ideas.

Before I say ciao, here are a few practical details that my wife makes me include:

Many thanks to Doc Sci for posting today!  Now, over to you – would you take your kids to the Museo Leonardo in Vinci?  Why or why not?

This post is part of Our Tuscan Family Adventure: Two Weeks of History, Culture, Food, and Fun in Italy series.  Click on the link to view our bucket list and recaps of each excursion!