Today’s Expat Christmas post comes from Farrah at The Three Under.  Read on to find out what traditions she’s keeping from the US, adopting from the Netherlands, and what she might ditch altogether.

To find all the Expat Christmas posts in one handy dandy place, just click here.

Sinterklaas & Santa – Christmas in the Netherlands

My family of 5 (three year old twins, four year old, husband and myself) have been in the Netherlands just over a year via the US. Last year we arrived weeks before Thanksgiving, and it seems like the entire holiday season was a blur. Fortunately, this year I have more of a handle on our day to day life and am actually able to research, dig in, and decorate for Christmas! 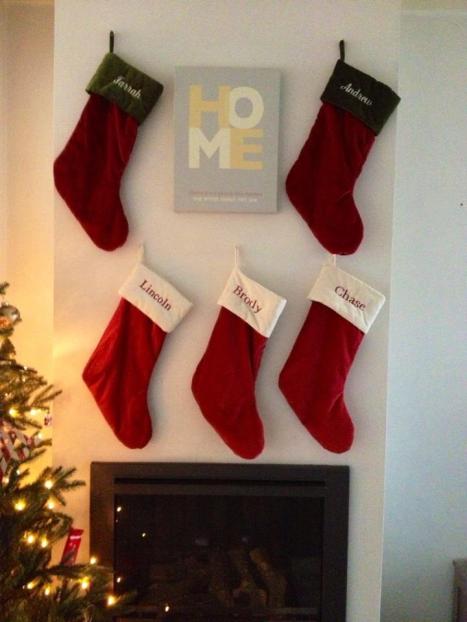 First and foremost, I realize that we’ve been competing with the whole ‘Sinterklaas‘ thing. Well, maybe not competing – but my boys are most certainly confused with how it all works and who lives where. For example – we’re all clear that Sinterklaas comes from Spain on a boat with his horse. My four year old is now confusing the fact that SANTA comes from the North Pole on a sleigh at the end of the month. There have been little gifts (cadeautje) left nightly in their shoes, and the big gift night is December 5th. We’ve been riding this goodie-high for over a month now and to be honest, I’m a little worn out.

We’ve kept up with the Elf from home – that little guy that sits on a shelf and didn’t move the whole month. Well, the boys are now at an age where they are truly excited over his antics – so for the first time we’re making an effort over his ‘creative placement’ at night. Nothing elaborate – but it’s fun. I can only imagine what the Dutch would think of this tradition!

Last year it was quite the conundrum as to what we’d do about a tree. For my entire thirty-six Christmases I have had a real tree. It took quite a bit of convincing from my husband that we were going to go the artificial tree route while in Europe. A real one just didn’t make sense if we wanted to do any traveling over the holiday. And bright side: this was a tree we would always have as our ‘European experience’ tree if we brought it back with us. Never mind that we’ll have to find a plug adapter – but he had a point.

When we go back to the states I liked the idea of having this tree and a real tree in the house. Plus, I’m finding the whole pre-lit, no needles, no water thing *almost* makes up for the lack of smell. For that I have asked relatives to ship me pine scented candle tarts to burn daily.

As for other new traditions- we plan on taking full advantage of the Christmas market scene here and see as many as we can in nearby Belgium, Germany, and in our own Netherlands backyard. Our weekends have been strategically planned out from now until January- which I can easily see doing every holiday season while we’re expats. It really is a magical season in Europe with so much to enjoy and experience.

The one tradition that I might be letting go of while abroad is cooking an elaborate meal. The amount of effort that I have to put into just cooking with Dutch recipes and Dutch ingredients (and the translating! oh the translating!) on a daily basis has me incredibly intimidated at the idea of pulling off a family holiday meal. I didn’t cook for Thanksgiving (and it was fantastic), so I am on the fence over attempting a Christmas feast. There’s still time – so I might. At least I figured out how to make our traditional Christmas cookies as that’s a pretty big deal to all of us – now that I know how to use the stove
properly!

Farrah can be found at her blog The Three Under where she shares their expat adventures and fiascoes as well as on Twitter and Instagram. She has three really cute boys who really know how drive her crazy.

9 thoughts on “An Expat Christmas: Greetings from the Netherlands”