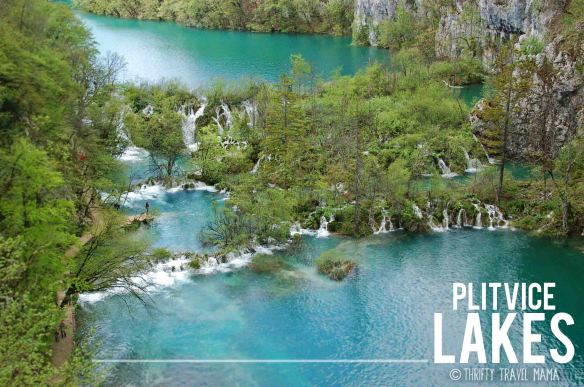 The scenery at Plitvice Lakes is the kind of thing travelers’ dreams and coffee table books are made of. One of seven Croatian UNESCO World Heritage sites and eight Croatian National Parks, Plitvička Jezera deserves a spot on every traveler’s bucket list.

Unfortunately, that’s also the reason it’s often quite crowded, but more on that later. No need to start on a negative note…

While we mostly had an enjoyable visit to Croatia, a stressful ordeal with a smarmy rental car company nearly ruined our day trip out to this amazing national park (and the next few days trying to sort it all out). Wait, I said I wasn’t going to start out on a negative note.. Fortunately, our experience with Croatian roads was better than with the sleazy sales rep!

The interstate in Croatia is very modern – smooth roads, rest stops, slick tunnels, and tolls (calculate at viaMichelin). Leaving Zadar, we found ourselves wandering through terrain that reminded me of the Burren in Ireland, rocky and desolate.

We then turned off onto another local highway that meandered though villages and fields of sheep, goats, and cows. Many of the places looked abandoned, and we noticed quite a few cemeteries, some that just seemed to be plopped in the middle of a pasture (former battlefields?). Thanks to the whatever-floats-your-boat speed limit, we found ourselves at Plitvice in no time.

After paying the (somewhat) reduced admission fee for visiting during the off-season, we consulted the map. The park has seven outlined routes which you can browse in advance here. We chose a medium-length trail, Route C, and skipped off in the direction of the rushing water.

Notes and my thoughts on our route choice can be found in the practical tips below.

One of our first glimpses of the falls was this postcard-worthy photo. Sheesh, even those not that into nature would be hard pressed to not gasp at the cascading emerald waters.

We found out that the Lakes are NOT pram-friendly about five minutes into our visit when we decided to veer off from the crowd and explore some very steep, damp steps. Good thing Charlie was securely strapped into our trusty backpack carrier…

At the bottom of the steps, we realized we’d found Šupljara Cave rather by accident. Rick Steeves tells me that this site is popular with German tourists due to its use as a film location for a “Spaghetti Western” from the 60s.

Beyond the cave, it’s pure boardwalk bliss. Walking nearly on the turquoise water, this is as close as any visitor will get to taking a dip since swimming inside the park is prohibited. The wooden paths are narrow, and beware that oohing and ahhing when it’s crowded could result in a big splash and an even bigger fine. But do keep moving, though; the “big one” awaits..

My boys squealed with delight once we reached the Great Fall in the Lower Lakes because the cascading water was spitting at the visitors as it tumbled over the cliff. Kissed by the mist, we elbowed school groups in order to get thirty seconds alone for a family picture with the biggest rush in the park.

We then made our way through the rest of the Lower Lakes, fighting the urge to photograph every last little waterfall along the way. There are just SO MANY that by the end of our visit that (spoiler alert) I was suffering a bit from waterfall overload. I know, I know, first-world problem..

An electric boat shuttles visitors between the Upper and Lower Lakes. We took this opportunity to rest and refuel. Five cheese sandwiches later (that’s total, not each), we began our tour of the Upper Lakes. 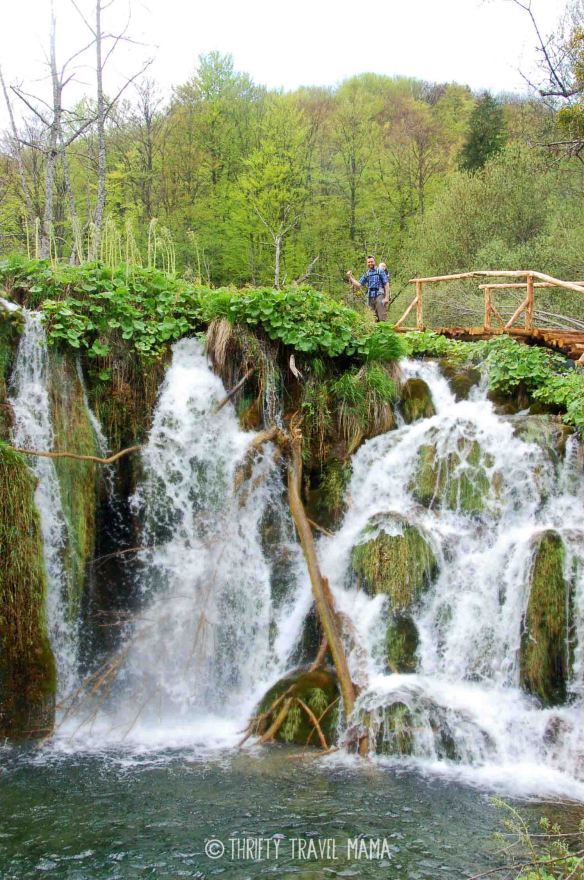 In many ways, we enjoyed the Upper Lakes more than the Lower. While the wooden walkways in the Lower Lakes seemed to be right at water level, the Upper Lakes allows visitors to literally walk over waterfalls. It’s such fun to see the gurgling foam flood out beneath your feet.. provided of course that your children aren’t delighting in the obvious lack of rails along the path…

Also, the Upper Lakes are quieter. Fewer tourists make their way here since many are day trippers that only have enough time to see half of the park. The appeal of the Upper is breadth while the Lower draws the masses with height.

Plus, we spotted fluorescent green lizards along the Upper paths, but (thankfully) no other reptiles. 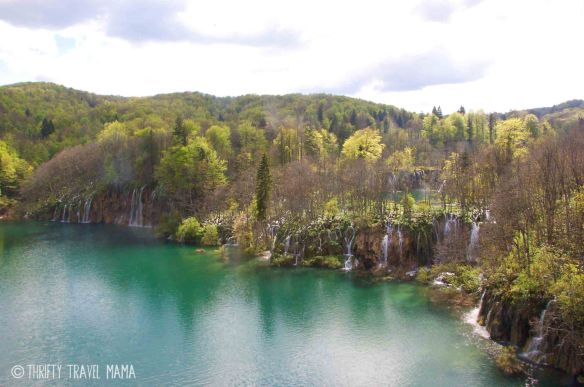 After we’d had our fill of that soothing rushing water sound, we decided to call it quits. One could easily spend two days exploring every possible footpath in the park, but a half day was enough for us to capture the best of the best.

When I think back on our day at Plivice Lakes in late April, what I remember most is the color, the sound, and the vast variety in the waterfalls. No photo, no video could do a visit here justice. One must see it to believe the jade waters are really that shade and not just Photoshopped so. So, jot it down on your list – Plitvička Jezera is THE Croatian natural wonder to see!

Plitvice Lakes can also be visited in winter (see here). Would you rather go in spring when the waters rage or in winter to see the cascades magically frozen?

Practical Tips & FAQ’s for Your Visit to Plitvice Lakes:

This post is part of Our Croatian Family Adventure: Ten Days on the Dalmatian Coast series.  Click on the link to view our bucket list and recaps of each excursion!

19 thoughts on “Walking on Waterfalls at Plitvice Lakes (Plitvička Jezera)”