Somewhere along the way we became that hiking family. You know, the ones with seriously ugly boots and those weird zip-off pants. I shudder to admit this, but I now consider SPF protection and water resistance rather than style when looking to buy new clothes. Please send help.

When our family was driving back from the amazing Kaltenberg Knight’s Tournament, my husband and I tried to figure out just when this switch happened. Exactly when did we realize that hiking was our family’s “thing?” And, someone please tell me, when did our four year-old decide that he (1) was not only capable but (2) actually enjoyed walking for hours in the woods?

When planning the aforementioned trip, I asked for trail recommendations in the TripAdvisor forums. I wrote this:

Later in the day, the full impact of what I wrote hit me, and I had to pause. Seriously, when did hiking TEN KILOMETERS with my kids become “ideal”?!

Anyway, I guess now we (mostly) just forgo fashion for natural beauty – as in rivers, trees, rocks, mountains. This is starting to sound like we’ve gone completely tree-hugger, but that’s not entirely accurate. I mean, at least I still shower. Goodness.

Plus, even if fashion is your thang, I don’t care how GQ you are – no one holds a candle to the Swiss Alps. Oh, golly do I love the Alps. In fact, I’m smitten.

And while it just feels right to snack on a sandwich at 3,000m, what I usually can’t stomach are the Swiss prices. I can only fork over so many francs in the summer hiking season.

It was, therefore, with great delight that I came across Moms : Tots : Zurich’s post about a hike in the Engelberg valley that only required a one-way cable car ticket and clocked in at a very reasonable 12 CHF per adult. For the hiking newbs, you ride the cable car up and walk back to your car. I completely understand if this sounds like torture to you.

As soon as the weather looked something like summer, we stocked up on trail mix (dear me, now we’re granola) and hit the road.

We did our usual bagel breakfast in the car, and arrived at the Fürenalp cable car just after it opened.

Unfortunately, even though the weather was warm enough to be classified as “not winter,” the skies weren’t entirely clear. In fact, the clouds changed about every twenty seconds.

As I usually do before venturing into die Schweiz, I stalked the weather forecast and webcam for days, comparing the predictions from several sites with the actual weather throughout the day from the 360° webcam. In the end, it’s always a gamble, and we decided we’d rather go to the Alps on a cloudy day than not go at all. Besides, everything in Switzerland can’t always be perfect, right?!

Well, since I know many of you aren’t hiking weirdos with convertible pants and trekking poles, I thought I’d just show you the hike in pictures rather than just yapper on and on about the trail. 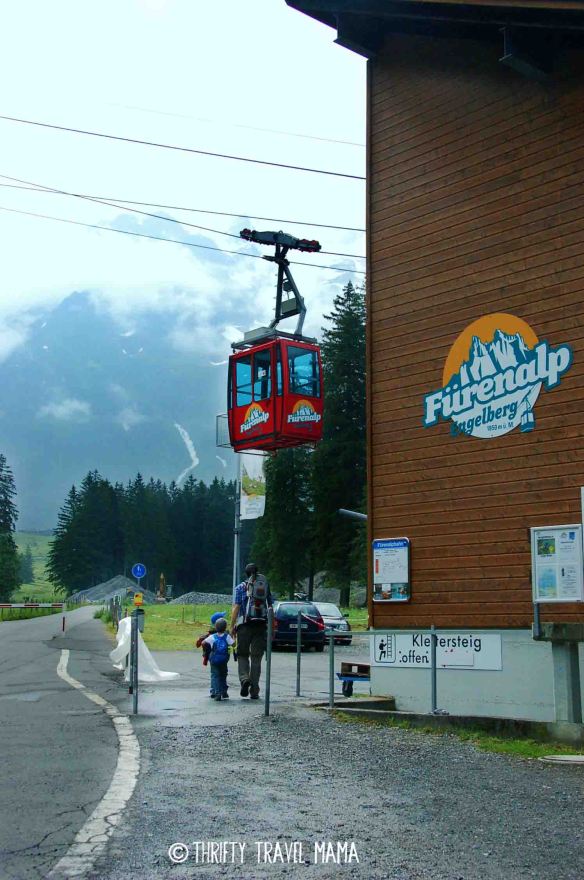 The Fürenalp cable car is much smaller than the ones we are used to. They hold 6-8 people, and the ride only lasts a few minutes.

There’s a photo at the station here that shows an old version of the cable car. It basically looks like an open crate, and the photo shows two children sitting alone in it and sailing up the mountain. Yikes.

Thirty francs later (kids under 6 are free), we’re off!

Goodbye, Engelberg! This turned out to be the clearest view we had of the valley the whole day. 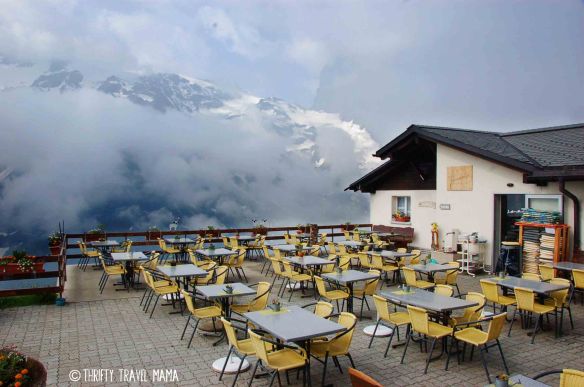 In Switzerland, there’s always a restaurant at the end of any cable car line. Note that the prices are as impressive as the views. 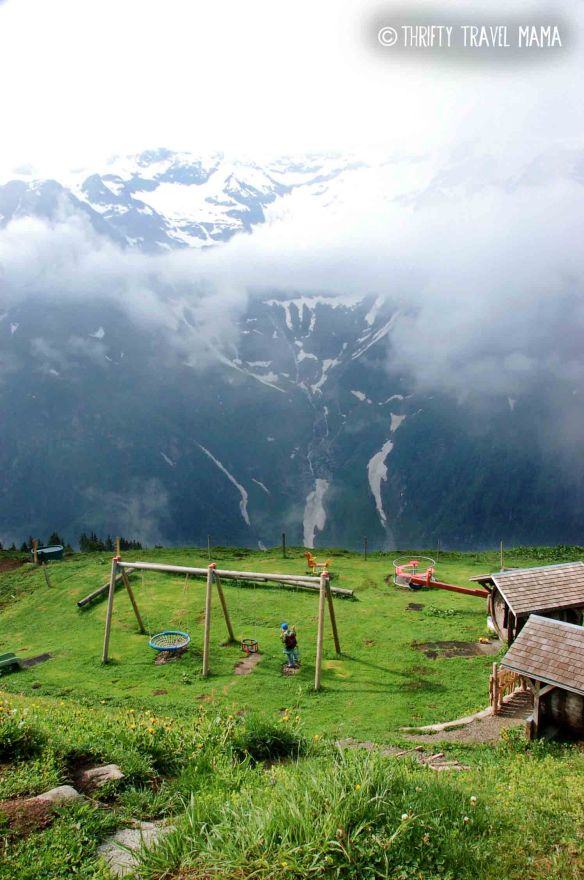 But, more importantly, there’s usually a playground at the top, too. This one did not disappoint. Not pictured: a giant trampoline to really get the altitude sickness going.

As we studied the trail map, Bessie and her buds moseyed up to eye the new trail meat. And yes, that strip of rocky dirt is the start of the Grotzliweg trail.

The kids liked the cows, but Doc Sci was a little chicken to share the trail with them so we took a parallel path. At the time I kind of ragged on him about it, but later, I read Tanya’s post about scary cows. Better leave those heifers alone. 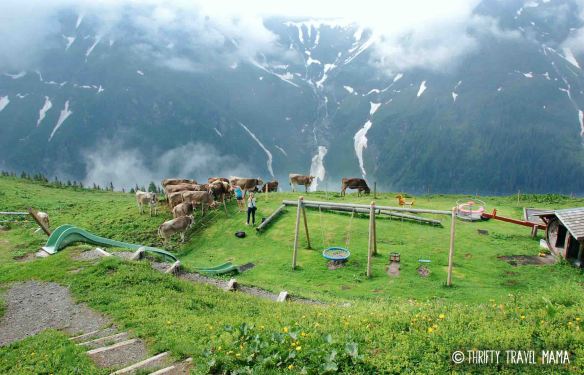 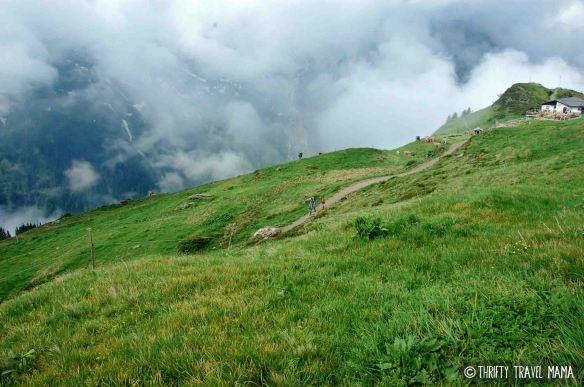 The trail starts out nice and easy. As Tanya mentions, you can’t take a pram here, but the terrain isn’t too rough for smallish hikers. 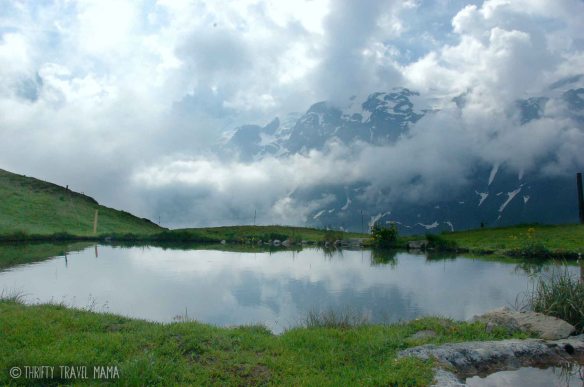 I noticed a sign pointing toward a small mirror lake (Spiegelseeli), so I left the boys on the main trail and ran up to check it out. I imagine this would be a perfect place for the kids to splash and frolic about when the temperatures oblige. 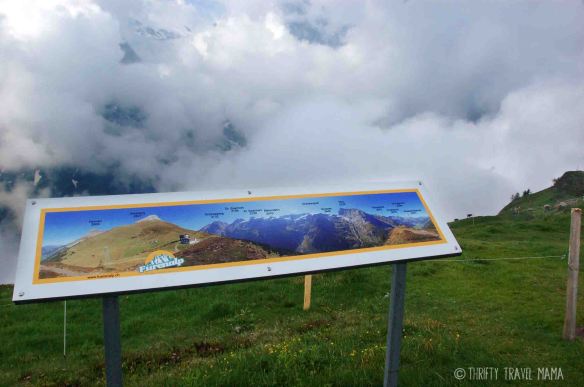 Had the clouds not been so annoying, here’s all the things we could’ve seen (including the more popular and MUCH more expensive Titlis). Sometimes we could see somber black mountain faces smattered with rotting streaks of snow. Other times we caught glimpses of those same streaks morphing into wild waterfalls that careened down the sheer drop-offs. And, in between, we couldn’t see anything but wispy haze that clouded the views we coveted of those majestic Alps. 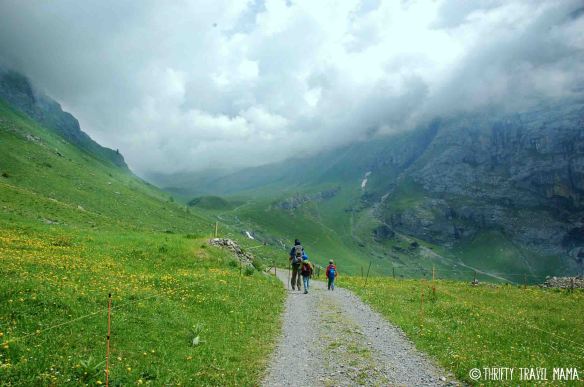 Along the way, we passed another even smaller cable car station, a handful of dairy farms selling fresh-from-the-cow products, a few restaurants, and the same four pairs of hikers. Everyone took breaks at different times and places, passing and being passed in a funny trail dance that bordered on annoying by the time it was over.

Speaking of that other cable car, if you find that you’ve bit off more than you can chew with a 9km walk, you can catch a ride down on it, and that would probably cut that distance in half. But if you’re game to keep walking, the station makes a lovely picnic spot.

After lunch, Bravo spotted one of the biggest cowbells we have ever seen.

One of the highlights of the hike is the Stäuber waterfall. It’s not really a place to wade or swim or test your luck in a barrel, but this section looked okay for the kids to dip a toe or two in (under supervision, of course). 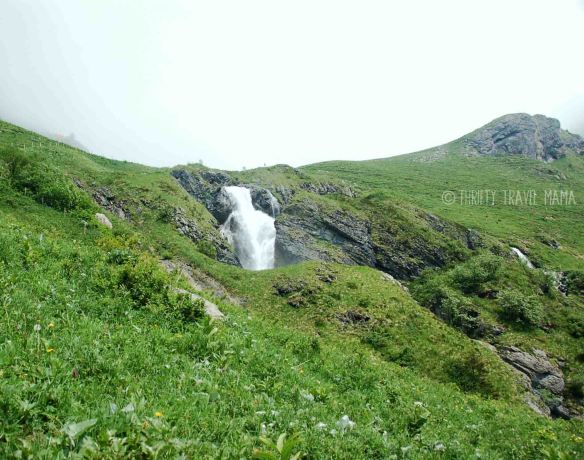 The waterfall isn’t particularly high, but it still had plenty of water flowing thanks to melted snow. Maybe it’s less impressive in the late summer/early fall.

The alpine flowers were in full bloom, and we actually saw more critters than usual (read: more than zero). We saw everything from dung flies to butterflies to a laminated frog (tractor tire?) and a silvery snake. All this in addition to the cows that, despite Doc Sci’s efforts to avoid, populated many of the paths. 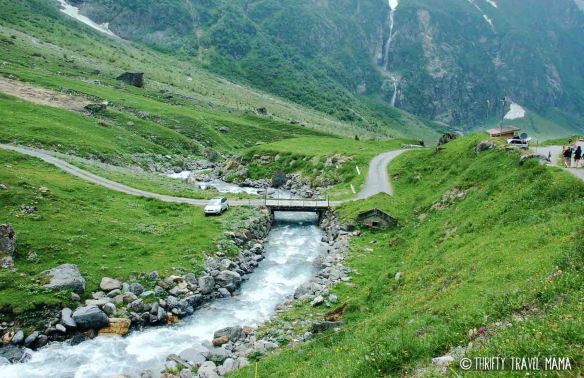 The route back down toward Engelberg follows this river which flows from the waterfall. The flow calms down a bit further on. We saw several places to wade in the frigid water, but it was still too chilly to do that, even in mid-June.

Toward the end of the hike, we entered a forested area that was rather unremarkable, except for this billy and his buds.

Once we cleared the forest (and another herd of cows), we found ourselves in a big open field with a view of the cable car and a bit of the Engelberg valley. An impressive finish, to say the least.

Whew! We did it – 9 kilometers completed, 30 francs spent, and untold numbers of treacherous cow pies avoided.

Even though we were the only family with kids that day, we still made it down the mountain in roughly the same amount of time as everyone else. We started our hike at 10:30am, and we finished just before 3:00pm. We stopped two times for snacks as well as at the waterfall to let our jaws hang loose while we stared at the simple yet amazing power of rushing water. Yes, despite the cloudy conditions, a good day was had by all.

This post is the first of three short trips to the Swiss Alps. In order to ease you into the sticker shock, I’m starting with the cheapest. But if you’re ready to jump in and bleed as much cash as possible, you can read about our pricey (but amazing) trip to Schilthorn last summer here. Stay tuned for our next stop – Mt. Pilatus!