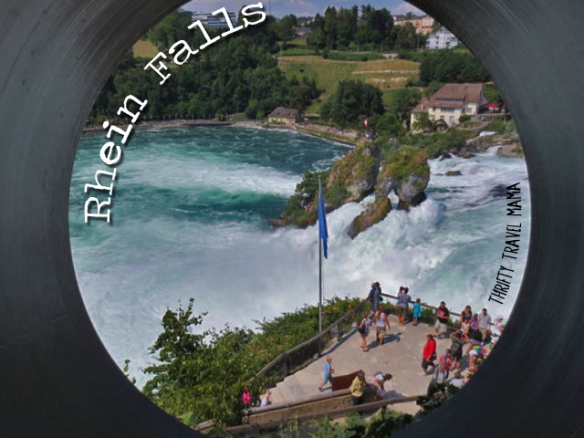 I have to admit, I’ve never been one to go gaga over rushing water.  The sight of water falling doesn’t thrill me as much as, say, castle ruins.  Victoria Falls is on my lifetime bucket list, but Niagara strikes me as total kitsch.  But, after checking out the Rhein Falls in Switzerland, I think I may have changed my mind.  There’s something elusive, even alluring about the formidable power of an imposing waterfall.

Just south of Schaffhausen in northern Switzerland lies Neuhasen, the closest city to the falls.  The Rhein Falls are an easy drive from Stein am Rhein, Hohentwiel, Konstanz, Mainau, or even Basel or Zurich.

Visitors can access the falls on both sides of the river either through Schloss Laufen or Schlössli Wörth.  The Schloss Laufen side charges 5 CHF per adult for admission, but parking is free.  Schlössli Wörth, on the other hand, does not levy entrance fees but the car park costs 6 CHF for 2 hours.  We voted Schloss Laufen; well, okay, the GPS chose for us. 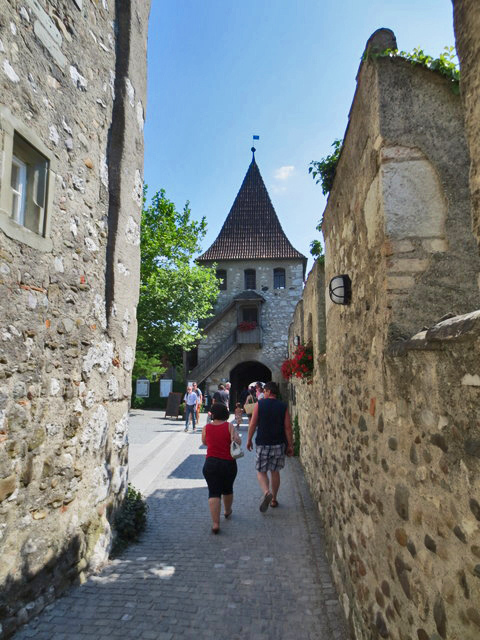 Schloss Laufen – not much to see in this castle except the inside of your empty wallet. 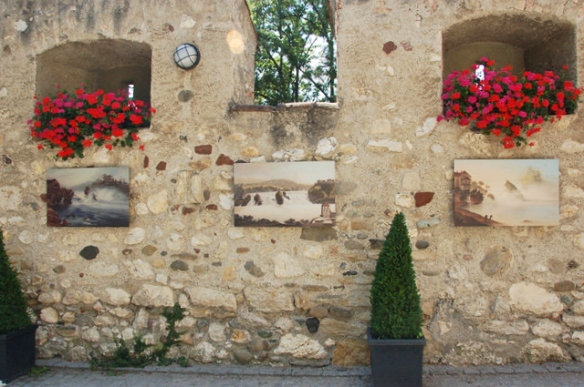 Part with your Swiss francs or euros at the ticket office.  Take advantage of the free, clean bathrooms around the corner.  Gaggle at the exorbitant food prices as you make your way to the castle.  A cinnamon sugar crepe for 6 CHF ($6.50) or a bratwurst for 7 CHF ($7.50) anyone?  Hey, at least parking is free!

Speaking of free, cheapskates should know that it’s impossible to see anything from the castle without an entrance ticket.  However, Doc Sci and I theorized that it is entirely probable that one could take advantage of a decent view from the boat ramp.

From Schloss Laufen, follow the signs for the train/boat.  Walk all the way out on the dock, but don’t board.  You should be able to catch a glimpse of the falls from there… but you didn’t hear that from me!

A stained glass turret at the beginning of the descent.

After scanning our tickets and walking through the turnstile, we descended via stairs to the first of several platforms.  Wikipedia described the way as “steep and narrow.”  In my experience, they were neither… at least not to the point of annoyance.

However, families with babies will find the steps a point of contention.  Though an elevator exists, it does little good for those who wish to experience the various platform views.  I noticed one or two parents with prams.  Frustrated, they had folded up their strollers and were lugging them around while the children walked.

Psssst!  If you haven’t caught on by now, I’m a huge fan of backpack carriers for little ones!

The elevator – all visitors exit the falls this way, but those with wheelchairs or strollers can enter here, too.

As you climb lower, the falls’ force and your fascination increases.  At one point, the water seems to be rushing straight at your face.  In a small cave near the bottom, you can even stick your hand in the stream. 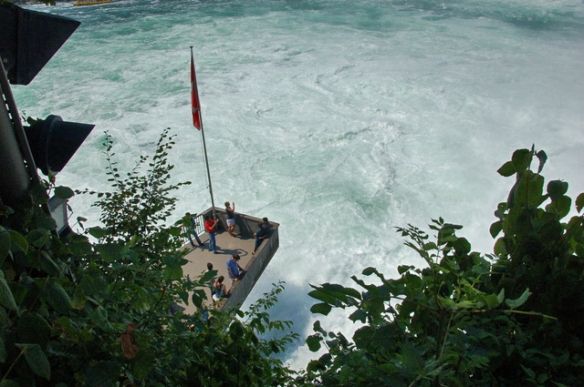 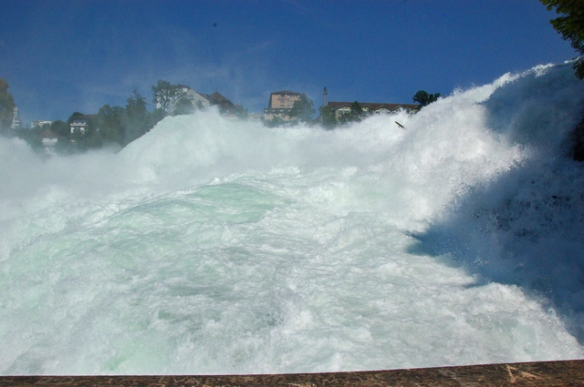 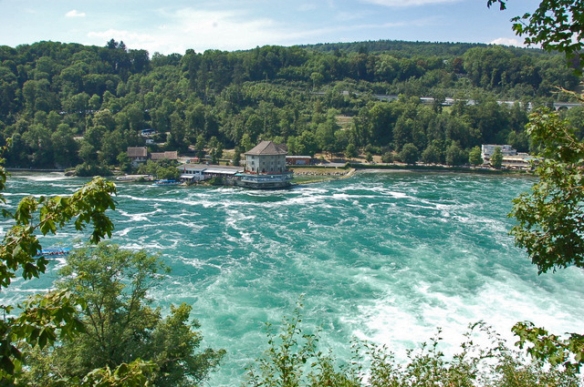 For serious thrill seekers, a boat ferries visitors from the Schlössli Wörth shore to an observation platform sticking straight up from the center of the falls.  Hats off to the skippers who must maneuver the torrid waters several times per hour.  I personally wouldn’t take small children on this excursion; but, if you’re interested, more information can be found here. 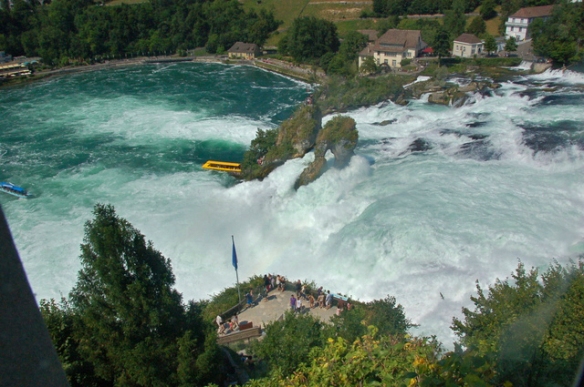 That yellow thing is the boat that takes visitors to the rock in the middle of the falls. The only thing between you and the water is a thin, metal railing! 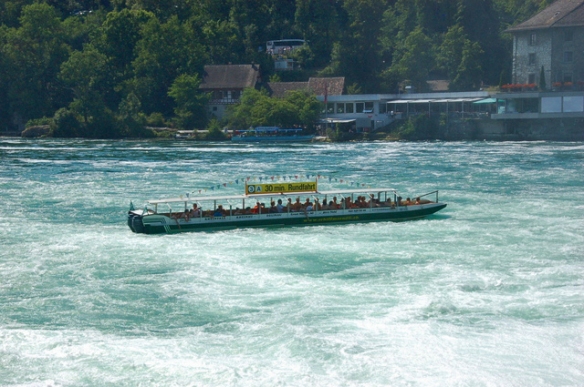 After you’ve had your fill observing the force of nature, head back up to the schloss and have a look around.  Kids can amuse themselves for a few minutes on the small playground; parents can decide if they’d like to splurge on an expensive fancy meal at the restaurant.

I can’t say I’ve been converted to a waterfall chaser, but I will admit that my interest in them has somewhat increased.  One thing Doc Sci and I have come to learn about ourselves in this expat experiment is that we love exploring all that the natural world has to offer.  So whether it be water or wind or forest or fjord, you can bet we’ll investigate anything once.. kids in tow.

Taking the family to Switzerland?  Check our adventures in Stein am Rhein and Schilthorn with kids!

5 thoughts on “Rhein Falls with Kids”